Why Do Women Say Fine When They Don't Mean It?

Why is that? Is it so incredibly difficult to just express your own feelings in an honest way that you have to lie about it?

As referenced here, the most frequent excuses that I've heard from women about why they use the word "fine" in a wrong sense are:

1. "He should already know what's wrong, so I don't want to explain it."

Obviously, he doesn't. That's why he's asking. Common logic dictates that if someone asks you a question, you're supposed to assume that they don't know the answer, and then it's your job to try to answer it for them. If I ask you what's wrong and you say "nothing", then guess what? Your answer is that nothing is wrong, which means I have every right to ignore what I had thought was a problem and what YOU said isn't. Later on, when you get mad because your boyfriend or husband or whatever ignored the problem that was there, well guess what, you had already said it wasn't a problem. In comparison, if you heard a noise coming from the car and your mechanic said nothing was the matter and everything is fine, because he just didn't want to explain to you something that you should already know the answer to, wouldn't you be pissed off if later on, your car died because of a problem? Think about that one the next time you want to lie.

2. "I say it's fine because it really is and I know that I'm overreacting, but I'm still being pissy about it."

....so why are you acting pissy if there isn't an issue anymore? Why use that tone? Just say it the way you'd normally say something is fine when it is.

Then just say you don't want to talk about it. That prevents us from having to keep asking what really is wrong. If you say you don't want to talk about it and you just want to leave it be, then okay, I won't ask again. Without that information, I'm going to keep asking you to clarify what's wrong so I can know what the problem is, better assess the situation, and then try to fix it. I can't fix a problem when I don't know what it is. And don't you want the problem to be fixed, rather than just ignored?

Then why am I asking? If I didn't care, I wouldn't bother.

5. "Because I don't want to burden you with my problems."

Again, then why am I asking if I wasn't ready to shoulder some of that burden for you? Let me help you.

There's no need for such a simple response to be so complicated. Honesty is the best policy. Just express your true thoughts and move on from there. Saying the opposite of how you feel is just going to hurt yourself and/or others.

The next time something is bothering you, don't just say that it's fine. Without clearly expressing what's wrong, you'll have nobody to blame but yourself when someone else asks if you're okay and that person goes "yup, she's fine" and moves on with their day while you sit and suffer in silence. 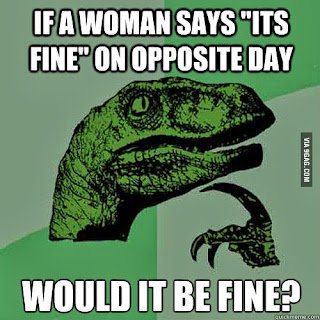