Fun for the Whole Family Means Boring and Unoffensive 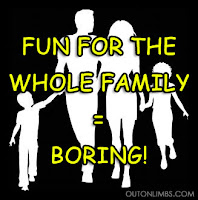 One of the key marketing phrases out there in the world of the entertainment industry that is supposed to be an enticement, but in actuality makes me want to run away with my arms flailing like an idiot, is when something is described as "fun for the whole family".

Why? Am I one of those weird people that tries to make it a point in every conversation to let people know that they don't want to have kids (as if it makes them special and interesting)? Do I have some kind of aversion to family fun? Do I hate children and old people?

The problem is that the saying is misleading. The intent is to make the audience view the product as being a well-rounded, entertaining thing that anyone of any age could enjoy. People "from 8 to 80" will like it, or so they say.


But that's not the truth, now is it?

More often than not, when something is advertised as "fun for the whole family", the message that these companies are sending out isn't that everyone will enjoy it. Instead, it's that nobody will be offended by it.

This is why you see this attached mostly to things that target little kids. You can't have a Veggie Tales episode with a storyline about substance abuse.


Pixar might be willing to make a film out of toys, cars, insects, and damn near everything else, but we're sure as hell not going to see an animated movie from the perspective of anything rated X. A Bug's Life is fun for the whole family, but A Prostitute's Life is an entirely different audience - and one that I'm hoping doesn't necessarily have a family to take to go see it to begin with.

Fun for the whole family is just a code phrase to let overly sensitive parents know that something is safe. It doesn't matter why you're worrying, they just want to let anyone who might be in this group know that they don't have to be afraid...nothing here is going to push your boundaries.

Most of the time, it seems like the targets are super religious and/or the type of people that try to act as though playing a video game is going to turn their child into a murdering psychopath.


But don't worry! It's ok! This is fun for the whole family, which means everything is tame and watered down. There are no risque jokes, the violence (if any) is so minimal and censored that it's in no way realistic, and the subject matter is absolutely nothing controversial. The good guys are always good, the bad guys are clear cut and always bad and they get punished in the end, and we've found a way to shelter you from the real world for a little while. That's what you're always after, right?

For example, I just saw a Lifetime or Hallmark (doesn't matter which, they're the same stupid thing) commercial advertising one of their TV movies that said it was fun for the whole family. Do you know what those movies are about? They're the most bland, uninteresting chick flicks available - and this is coming from a guy that WANTED to go see movies like Valentine's Day and The Time Traveler's Wife. There's no conflict at all. They revolve around being fantasies for a certain type of woman's idealized mindset: the woman that sees herself working in the city at a magazine or something and wishes they could meet a tall, dark and handsome guy who is charming and funny and just enough of a bad boy that they can change him while he fixes all the problems in their life in one easy step.

If this is fun for the whole family, do you really expect a 13 year old boy to like this? What about Dad in his 40s who would rather be watching football?

Are you a family like the one in 7th Heaven? Are you one of those weird families where nobody is allowed to eat sugar and the kids think lima beans are a treat? Are you so butthurt as an adult that you make wimps out of your kids? Fun for the whole family might be right up your alley, but I can guarantee you that your family is not fun for everyone else.

It's extremely rare to find something marketed as fun for the whole family that actually could be fun for everyone. As far as movies go, the previously mentioned Pixar has a good track record of pulling this off. Amusement parks are a good example of something that fits the bill. Miniature golf, similarly, seems to be fun for pretty much everyone if you're in the right mood. Swimming in a pool? See, there's a few, don't jump on me with hate just yet.

Don't get me wrong, I'm not saying you should force-feed your toddlers smut. Discretion, people. I've said it time and time again, I wasn't even 5 years old and two of my favorite movies were Terminator and Batman. I turned out to be an extremely loving and caring person because my parents did a good job. I'm not desensitized to violence, but at the same time, I'm not SO utterly devastated when the littlest thing happens because it was hidden from me for my whole life and I lived in a fantasy world's secure little bubble.

When I have kids, I expect them to watch cartoons instead of American Psycho, but if I surround myself only with things that are "fun for the whole family", that will just be way too lame for me to be able to handle. Viewer discretion is advised. Parental guidance is suggested. Don't just completely neuter everything and shield yourselves because you can't handle it...learn to handle it. You'll enjoy many more things when you have more options.

Spoiler alert: Out on Limbs is not fun for the whole family ;)