Leave the Toilet Seat Down or Put Up?

One of the age-old arguments between men and women revolves around the proper etiquette of the toilet seat position. Women complain that men leave the toilet seat up, men forget to put the seat down (or consciously choose not to). Which one makes more sense out of the two options? The answer to the great debate is rather simple. 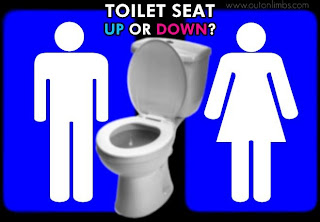 I shouldn't have to explain the methodology in which men and women use the toilet. If you don't understand that, then you're one of two things. Either you're either a child who shouldn't be reading this website in the first place [or better yet, read it more so you don't grow up to do the stupid things your parents do] or you've got performance confusion and should definitely not use a public restroom for common courtesy of those around you. Nobody wants to see you take a shit in a urinal [ok, that might be funny].

Very simply put, in the cleanest way possible [no pun intended] men have the ability to utilize the toilet for all three primary functions if the seat is down. Those primary functions are urination, defecation, and vomiting. You don't have to be a trick shot artist with marksmanship aim to pull off the first, the second is self-explanatory, and the third implies that your head is already hovering the area so there's not much more ground you can cover from that angle. For the sheer awkwardness that I can assume comes from squatting for women, compared against the versatility men have, it's hard to argue in favor of putting it up and needing to do that extra work.


Granted, that extra work is not that difficult at all. It takes one second to move a toilet seat. There usually aren't situations where there's an emergency and you not only don't have that extra second to adjust the seat according to your problem, but also that you're unable to look ahead of time. For the women that complain that they'll fall in if the seat is up, you should try glancing at where you're going to plant your ass before you start backing up and parking. Men have even less room to complain considering that we stare facing that direction the entire time.

When you rule out that both sides lose on the argument of cleanliness (as keeping the cover down on top of all of that makes for a less shitty looking [pun intended this time] bathroom), it really boils down to the points above. For those reasons, the women have won this round. Sorry guys, you'll just have to put up with it.....pun not intended but greatly appreciated.

Got any good stories about this argument? Want to voice your concerns [seriously?] or just vent about how annoying people can be about this? Leave a comment below for some discussion and tell us.
editorial, relationships