5 Reasons I Suck At Gambling 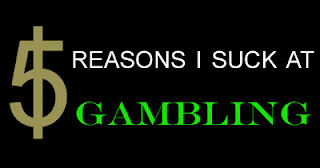 I'm the first person to admit that when I have zero skill in something. Thus, here's an examination of one of the things I'm terrible at: gambling.

1. I'm a money-saver
For as long as I can remember, I've never been someone to really spend my money. Sure, if someone dropped a million dollars on my lap right now and told me it was mine, I already have a game plan set up for just exactly what I'd buy (and trust me, it's complicated and well thought out). However, since that has never happened to me, I save my money and I'm very frugal. When it comes to gambling, the first hump I'd have to get over would be spending the money in the first place. It's essential. You have to spend money in order to make it. To be fair, though, I disagree completely with Ben Franklin's "a penny saved is a penny earned" phrase. I don't see any extra $20 bills in my wallet from the ones I haven't spent. [You could argue that you earn through interest with banks, but the rates are so low it only really applies to people with a lot of money, and they can afford not to pay attention to those interest rates. Fuck you Ben Franklin.]

2. I overthink and second-guess myself
Remember how in the above part I said that I have a plan just in case someone gave me a million dollars? This is detrimental to my gambling abilities because I don't like to just trust my instincts on things. Once you figure out what you think is the right answer, you can't keep thinking of the alternatives. It's just like me to bet on red for 12 turns, see it come up black all 12 times, and consider switching to black instead of keeping it on red for probability's sake. That little doozy has hurt me in more ways than I can remember when it comes to gambling.

3. I'm too cautious
For many people, the sheer act of gambling is worth the money you're gambling with in the first place. In fact, I'd say most of the people I've asked in my life have said that if they went to a casino and lost all of the money they had gone there with, as long as they had fun, it was worth it. I, on the other hand, don't feel that way. I'm not a risk taker. I like to plot my moves out ahead of time and prepare for the worst, hope for the best, and expect something somewhere in the middle. To me, if I were to go to a casino with $100 in my wallet, gamble the entire night, and walk out with $110, I won, but if I walk out with $90, I lost and now I have to figure out where I'm going to make that 10 bucks back. It's a thrill ride when you put your money in a slot machine and you wait to see if you've hit the jackpot, but while for most people the thrill is of anticipation of the win, my mindset is more of an anxiety hoping that my coin lands heads-up.

4. I take losing very hard
I wouldn't necessarily say that I'm a sore loser, but I know full well that I'm not someone who can take a punch and then go about my day. If something bad happens, I dwell on it for a long time. If I say or do something stupid, I beat myself up about it and I haunt myself with it. Some other people are able to eat a loss, grit their teeth, and then brush it off and move on. If you're gambling and you lose a couple hands of blackjack, you might think to yourself that it sucks but "the next hand, I'm going to make it all back". I typically run to the thought of hating the fact that I lost those previous hands and trying to figure out what went wrong, how I can correct it in the future (overthinking again) and then my day is ruined.

5. I'm too nice
It may seem otherwise, but I'm actually a really nice guy. This is a huge downfall when it comes to a game like poker where you're looking out for yourself and screwing everyone else over. If you were to ask me what I'd rather do, be the sole winner out of a poker table and be able to gloat about it or make it so everyone wins the same amount of money, I'd rather everyone win. Now, of course, it's a different story if you're asking if I'd like to split the money I've won on my own with other people. Sorry, not going to happen. But I don't like to haggle with salesmen because I know that, even though I want to get the lowest price possible, I also don't want to screw them out of their commission that they worked for. I'm not saying you need to be MEAN to gamble, nor am I saying that nice people can't win money (especially since slot machines and roulette wheels are, you know, inanimate objects and you can't hurt their feelings - unless they're in a Disney movie and anthropomorphic...I digress) but if you're worrying about the person next to you and whether they look like they deserve to win some money as opposed to whether they have a better hand of cards than you do, there goes your poker face. Please insert your Lady Gaga joke here.

So there you have it, an explanation of why I'm terrible at gambling. If you can avoid these pitfalls and you have a lot of help from Lady Luck on your side, then by all means, hit up a casino and go for it. If you find yourself in the same position that I'm in, on the losing side, maybe we can start a club together...but you're paying.
list, offbeat