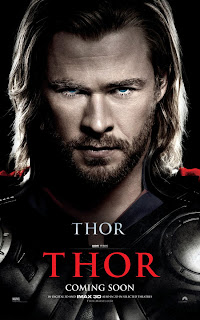 I've been a Comic Con type of guy my whole life, so I feel a sense of devotion to see the films and television shows associated with the products I'm aware and a fan of. Thor has always been one of those things that I considered a bit of a burden. Give me Batman, Spider-Man, X-Men, Superman, and many many others before you give me Thor. When they announced the whole Avengers concept, I was looking forward to it and despite my history of not being the biggest supporter of Thor, I obviously was hoping the character would be in it. When the movie was announced, I knew I'd see it no matter what, but figured I would have to just bite the bullet and spend 10 dollars on crap.


WARNING: SOME SPOILERS AHEAD.

STORY: Thor kind of lays between a Shakespearean play and a comic book film. You have your typical action sequences and such, but the core is predominantly about sibling rivalries, trying to please your parents, and growing up. You can basically remake this movie without the special effects and turn it into a drama about two immature teenagers and a family business. I think Branagh understood that and turned the volume up, giving it much more than just a "smash'em fiasco" that some superhero stories turn out to be. Nice job.

ACTING: I was surprised to see so many big (or relatively big) names attached to this film until it dawned upon me that they were all doing it for the chance to work with Branagh. Natalie Portman basically said that on repeat when asked why she did the film. It wasn't the idea of being in a comic book movie or that people loved the Thor character that drew them in, it was Branagh. It pays off as you can get quality actors that help promote the film and give it the sense of importance that it needs to stay relevant and pull it all off. Chris Hemsworth in my mind played Thor to a T (no pun intended but if you appreciate it, good for you) and I really have nothing bad to say about any other performances as well. Tom Hiddleston nails Loki. Anthony Hopkins nails Odin. Clark Gregg is once again charming as Agent Coulson. The reality of it may be that there are no Oscar performances, but everyone does their job well. One thing I found particularly interesting was just how little of Rene Russo we got to see, considering how many big name stars end up pushing for more scenes for themselves at the expense of the film. That would have been needless and they avoided doing that, so her role is very limited, but serves the purpose.

MUSIC: Even though I tried several times to take notice of the music, I honestly couldn't find anything that stood out. To me, this was one of the weak points of the film. There's no Thor Theme stuck in my head at the moment.

VISUALS: Visually speaking, I don't think you can really ask for more. The costumes, while elaborate and a bit silly looking at times, are from a different civilization and you get the feel that there's continuity amongst that (ie, everyone wears similar attire but different enough that you can see they all have their personal touches and that it would come from Asgardian culture). The special effects don't look cheap or unrealistic either. If I had one gripe about the visuals it would be that mostly all of the 3D elements were pointless. I don't see the need to have characters pop out in 3D effect unless it's something that would be exciting - not just two people having a conversation.

ENTERTAINMENT: Superhero films are almost always entertaining without fail. This is definitely a summer popcorn flick that kept me entertained the whole way through. It will probably get some criticism from people saying that there isn't enough action, but for me, it had enough to satisfy my needs and not overdo it.

1. I enjoyed the Donald Blake references.

3. Hawkeye....meh. Look, it's better to have Hawkeye than just Guard #3, but to me, there was nothing to get excited about. He was just Guard #3 with a bow.

4. Thank GOD they chose the more modern Thor outfit instead of the bright blue and whatnot.

REVIEWPOINT: HIT. It's no Batman Begins, or Spider-Man, or even Iron Man in my mind, but it exceeded my expectations and I don't feel as though the money I spent on the ticket was a waste. I may not ever buy it, but I'm very glad to have watched it.
entertainment