Of course you did. 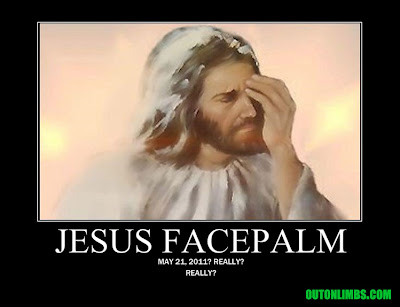 The problem here is blind devotion. It doesn't JUST happen with religion, but religion seems to be the biggest mass attractor to this type of following. Step one, some guy named Harold Camping interprets the Bible in a way that makes him think that May 21, 2011 is the Rapture. He already has no proof that the Bible is definitive, but believes in it. [Note: I'm not trying to say that the Bible is 100% wrong...just that without proof, you shouldn't believe in it 100%, just as you shouldn't completely count it out if you haven't disproved it yet] He then believes, without proof, that his interpretation is correct. We all fuck up when interpreting shit. I used to think for YEARS that the lyrics of "Papa's Got a Brand New Bag" were "Papa's Got a Brand New Back". I was wrong. But Harry there believes in his interpretation and lets everyone know. Admirable in the sense that if he were right, he at least warned us. I'm not knocking him there. But I am knocking the people that went "OMG, some dude thinks the world is going to end....AAAAAAAAAAAAAAAAAAH!!!"

The International Business Times is reporting that Camping might have even gone into hiding out of embarrassment from this, because, well, you know...falsely predicting the apocalypse is bad business. Why not man-up and admit that you were wrong? Everyone already knows it. You're not hiding anything. It reminds me of elementary school when you would see that a kid pissed himself and he'd try to blame it on the toilet water splashing up and soaking his pants - something none of us have ever seen yet it apparently happened this one poor kid like once a month and conveniently only ever wet his pants and nothing else. When you put yourself out there and it's obvious that you're wrong, just admit it. You're not saving face by lying. In fact, you're losing your credibility even more so, cause now not only are you WRONG but you are also a liar on top of it. Camping hiding isn't the same as lying, but we'll see what happens when it comes to that, especially considering how I've come across articles recently that said some believers of this apocalypse would stick to the date no matter what, even if it passed. "So, Harold, remember that apocalypse yesterday that didn't happen?" / "Yes it did. You just blinked."

Believe in whatever religion you want, or DON'T believe in whatever religion you want, but just be smart enough to realize that you should never dive into anything without testing the waters. Countless numbers of people have tried to predict the End of Days in the past and the track record isn't exactly good for them, so what made you think that this would be any different? Could it have been? Sure. But do you also panic every time you take a bite of food because you could potentially choke on it? You can't live your life like that - otherwise, there's no life to be taken away if/when the apocalypse would happen.

Aw, since this seems a little too sincere at the end there, I need to balance it with something rude: 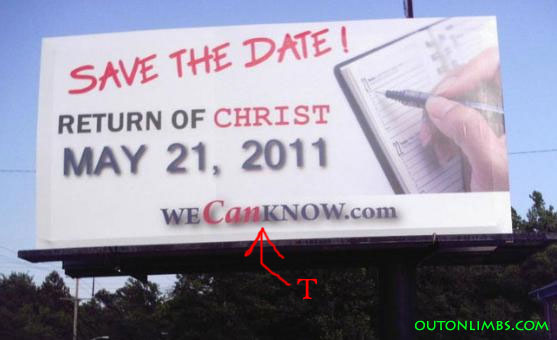