President Obama called it a distraction and that's exactly what it is. First off, this whole 'Donald Trump running for office' thing is nothing but a publicity angle and if you don't see that, you should probably stop reading this article right now because you're more than likely too stupid to understand the big words I'm using like "nonsense". This whole Trump campaign is just orchestrated to get people talking about him in a higher sense so in the future, everyone can refer to him as being a potential candidate for the highest office in the country. Also, think about this: if you don't like the guy at all and you don't like anything he does (which it seems like most people are willing to admit) why would you buy into this and give him what he wants?

On top of that, the whole "birther movement" is beyond ridiculous. The same people that think the government is this damn near infallible Big Brother-esque power machine also think that Barack Obama was able to make it up to the fucking PRESIDENCY without proof of having been born here???? Jesus Christ, people, you have to pick one thing or the other. If you're willing to believe that you could get that deep into our country's infrastructure with fake records, you have to admit that our country is so incredibly inept that there's no chance at rebuilding our prestige and economy. Why? Because anybody that goes out for college grant money knows that the FAFSA isn't the only thing you need and it takes absolutely forever to go through all the paperwork and documentary proofs just to get a few bucks off your books each semester, and that's absolutely nothing in comparison to becoming President of the United States. If the colleges that don't know what they're doing are better at this than the fact-checkers for the Senate and so forth, we're doomed as a country. I bet many of you could be transported back in time to watch the birth and still not be convinced.

*On another note, yes, I voted for Obama and I supported his positions, but that doesn't make me a blind suck-up to him.

*And on another note, anybody that is bitching right now that the economy isn't fixed and thinks they wasted their vote on Obama in the first place must have been stupid enough to think that Obama's election process was enough to cure all the problems in a year or so instead of being realistic. Bush was the driver in the car, Obama is the passenger, and Bush drove it into oncoming traffic and jumped out at the last second, leaving Obama with the responsibility of jumping into the driver's seat and trying to navigate safely out of the interstate. Don't blame the problems that come with the job on the guy that just got the job - blame it on the guy who caused the problems in the first place. 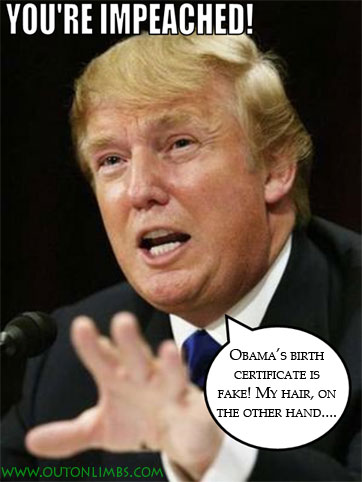