Take Food Network celebrity chef Ina Garten, mix her with the Make-A-Wish Foundation, and add a little bad publicity and you have a recipe for disaster. I'll give you a second to digest that awesome pun...and this one.

Here's an easy question you should all know the answer to: you're the star of a cooking show and a terminally ill kid uses his Make-A-Wish opportunity to ask if he can meet you and have a cooking lesson...do you accept or decline?

Naturally, you accept....unless you're Ina Garten, of course. I'm not a fan of the Food Network as I'm not a fan of cooking, I'm a picky eater, and I don't find the shows to be particularly entertaining, especially when the star involved looks more like Roseanne Barr and isn't one of those hot ones like that Giada De Laurentiis or Rachel Ray or whatever. I have, however, seen one episode of this woman's show. I found it boring like the rest, but hey, some people like that, and I couldn't really criticize the woman herself because literally her whole persona was nothing but "I enjoy cooking and eating and it makes me happy". Well, now I can criticize her, as it's fucked up to turn down a Make-A-Wish offer.

She turns it down, then realizes it's a bad PR move, says she'll do it, and good for the family, they reject her and let everyone know about it. Obviously, that doesn't help the kid's health problems, but it does make sure that Garten doesn't get away with snubbing him. Unless there's some weird misunderstanding that happened (like she said she couldn't do a specific day and her manager said "she can't do that" and they took it as "no"), then it clearly is a case where she didn't want to do it, realized after the fact that it would look bad for her career, and then agreed to do it merely to try to save face, and that's one of the big issues here. Make-A-Wish and other charities aren't supposed to be about you granting the wish, they're supposed to be about the people getting it. Sure, you can donate money to charity and write it off for your taxes, which is good (and the absolute best motivator for people to do it) but the primary focus should always be on the cause itself. That's the reason the charity exists. If it were just a money laundering firm for rich people or simply an organization devoted to making celebrities look like nicer people then we wouldn't be talking about it, would we?

Look, it's a complicated relationship between fans and celebrities and sometimes, it gets a little confusing. I've always been of the opinion that both sides need to compromise for the opposite. For instance, if you're a celebrity and someone asks you for an autograph, if you're not busy, you should sign it. You won't remember that one person, but for the rest of their life, that person will remember meeting you and it could mean a lot. However, a fan shouldn't pester you if you're busy, and they should understand that sometimes, you're in a bad mood, sometimes you really DO have no time to sign autographs, and you really do want to just sit and eat your meal at a restaurant without being bothered. Celebrities naturally have to understand that they're in the public spotlight, but at the same time, the paparazzi is way too invasive to a ridiculous level. When it comes to issues like fame, things get tricky because you're dealing with always being "on" and not slipping up because you have to maintain a positive image (or, you know, start your whole career with a negative image like a sex tape and gaining fame through being a slut). It's stupid that celebrities can't be themselves and if they say one little controversial thing, suddenly they have to apologize for it even if they don't mean it, do a bunch of PR work and image enhancement training and pretend to go to rehab for anger issues or whatever. HOWEVER...a situation like this is really odd. Forgive the stereotyping here, but a little boy typically would be more interested in meeting a sports figure or an actor or something, generally speaking. If you were to ask most little boys what their celebrity wish meeting would be, they'd probably say something like Lebron James or Megan Fox or something, not a TV chef. Then, when you couple in the fact that the kid most likely only has a short amount of time to live and they chose this one thing to be that big event in their life that they get as compensation for a short time on the earth...PR shouldn't even really be an issue. It should be a no-brainer to go along with it just out of being a decent human being. If an old person fell down, you'd help them up even if you weren't in the public eye and had an image to maintain, correct?

Normally, this blog is about me being the asshole and pointing out stuff that people might not necessarily be willing to say on their own - or me just being an asshole to be funny - but I thought it would be a nice change of pace to point out things from a more optimistic point of view, especially when it helps get the story out that someone was acting like the type of person that screws this world up. 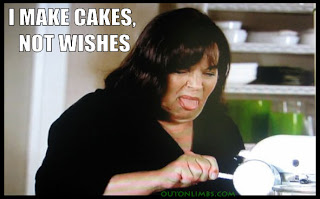