So apparently, Pepsi's new "skinny can" is pissing people off. They're advertising it as a "taller, sassier" version that celebrates "beautiful, confident women"...yet people are bitching and complaining, saying Pepsi is promoting poor body image ideals.

Come the fuck on, people. Dangerous stereotypes of body image, just for saying SKINNY? You do realize that being overweight is a bad thing, right? And it isn't "the anorexic can", it's the skinny can. If Pepsi started using the tagline "If you're over 90 pounds, you're ugly", then I could see people getting upset, but seriously, everyone needs to knock it off with this hyper-sensitivity when it comes to supporting people that aren't fat. We've gotten into this stupid rut of people latching onto the phrase that "real women" aren't skinny, as if being physically fit is something unattainable and alien to us and should be shunned upon rather than sought after. It's so much easier to just bitch that it's someone else's fault for making you feel bad that you're fat rather than admit that you are the reason you're fat, and then go out and lose the weight, isn't it? Now we're blaming Pepsi? Here's a hint: if you're too fat, STOP DRINKING SO MUCH FUCKING SODA IN THE FIRST PLACE!

Now, I'll criticize Pepsi itself for one thing here, and it isn't the idea of "skinny = outrageous expectations = Pepsi is the devil for not telling me it's ok to eat another pie" because I'm not a goddamn moron, it's the idea of this promotion existing in the first place. Jill Beraud, the chief marketing officer for PepsiCo (aka, "big pay check person") said: "Our slim, attractive new can is the perfect complement to today's most stylish looks, and we're excited to throw its coming-out party during the biggest celebration of innovative design in the world", New York's Fashion Week. My problem here is simple: IT'S A FUCKING SODA CAN. Why is it being mentioned for a fashion show? And who decided that the can itself needed sex appeal in the first place? Does your product suck so bad that you need to try to get people to look at the can and want to fuck it after they're done drinking it? If so...you've got one weird ass marketing team....and some weird ass clientele if they follow the formula and comply with that methodology. Right now I've got a bottle of Gatorade next to me and nope, it doesn't make me feel any skinnier, fatter, or God forbid, hornier.

What's next? Is McDonalds going to come under fire from the fat asses that super-size everything because they feel sad that some people are ordering a "small" fry? If your self-esteem is so shot about your weight that the idea of a thinner soda can has you upset, maybe you should have one of those cans sitting next to you the next time you're scarfing down a bucket of fried chicken. Everyone needs their motivators. 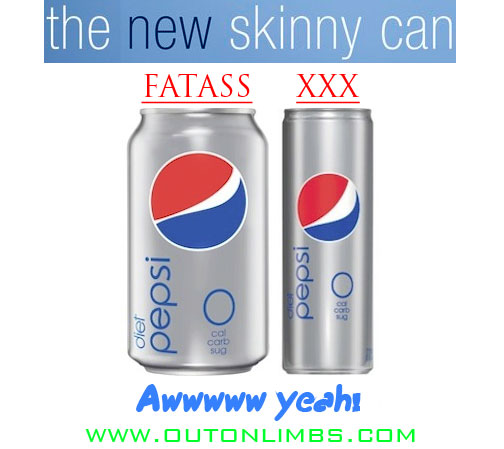