There Will Never Be a World War 3

Does that mean we won't have another war that involves multiple nations? No way. We have that all the time. The likelihood that one of them will magnify and become even bigger than the more recent wars isn't even worth debating because eventually it will happen. That being said, we will NEVER classify something "World War 3", and I'll tell you why...

It's been decades since World War II and we've had the ongoing Vietnam War as well as tons of Middle Eastern "conflicts". They give these wars cutesy names instead, such as "The War on Terrorism" or "Operation: Iraqi Freedom" because nobody wants to commit to titling something WWIII.

The general rule of thumb for 90% of the universe seems to be that things balance out in threes. Top/middle/bottom. Left/center/right. Black/gray/white. Positive/neutral/negative. A beginning, a middle, and an end. We make trilogies of everything. Once we say something is WWIII, we've capped off a trilogy of wars. Since the first two were inspired primarily by Germany, that'll be the only instance where people may be willing to do so - if Germany is heavily involved (particularly as the adversary of the United States).

There's also the issue that we lose the fear factor. It's become a buzz phrase to say something will cause World War 3, which has been built up as "the war to end all wars". Nuclear holocaust. The end of the human race. People reverting back to cavemen eras. So on and so forth. If we were to call something World War III and it doesn't live up to the hype, we'll either retroactively stop calling it WWIII (which is a mess) or we'll have to create some new pinnacle. Nobody is going to fear World War IV as much as everyone fears World War III right now. Threes give you finality and end things. Four gives you a reboot and a whole new set. Buzz phrases oftentimes take on a life of their own and eclipse their original purpose. Our expectations of what World War III could possibly be at this moment surpass what our expectations were twenty years ago. We've been building up World War III since the end of World War II, and it still "hasn't happened". The legend grows. The fear multiplies. "If the Iraq War isn't bad enough to be called World War III, my God, what are we in store for?" It keeps the myth up and every time you say something has the potential to start World War III, the power behind it is enormous.

Thus, I highly doubt we will ever see something officially declared "World War III" in the textbooks read in history classes. 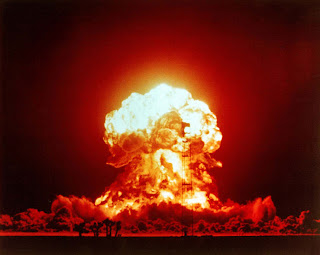