It's time to examine another stupid thing society does: the notion that being a "snitch", a "rat", a "tattletale", or whatever you want to call it, is somehow a negative trait for all involved.

Let's get the obvious out of the way. Clearly, the people that are doing bad things are going to look at you negatively if you tell on them. That's nothing to be shocked about. But forgive me, it's just plain hypocrisy if we tell kids/adults that they shouldn't be tattletales, then get mad at them for keeping secrets about bad things.

People like to argue that it's all about loyalty. If you rat on someone, you're a dishonest person who can't be trusted. What people are masking here is that you can't be trusted to cover up when someone does something they shouldn't be doing. Loyalty is an admirable quality, but not when you're being loyal to negativity. You mean to tell me that you'd rather raise a child who is die-hard loyal to his gang member drug dealing friends than a child who ratted out to the police that his employers were criminals? People always tell children that they shouldn't be tattletales, but the minute they find out that someone did something wrong, and they aren't speaking up, they berate them. It's hypocritical, like a ton of problems with people today. As always, if you're disagreeing with me right now, thinking that people should never be snitches, then do yourself a favor and take a look at the issue from all sides. You do something bad, you want people to cover it up. Someone does something bad to you, you want everyone to tell you who did it, right? Now try to tell me that snitches are bad. They're only bad if they're targeting you.

So often, you hear about people that claim to be wanting to do the right thing, but not if it means that they'll be a snitch. A cop knows some fellow officers are dirty, wishes they would stop, wants to get rid of crime, and then says "I'm not a rat". Something about the honor code and blah blah blah. Isn't that thrown out the window when you're a crooked cop or a criminal or anything else where the point is that you're trying to hide your misbehavior? Turning a blind eye to crimes does nothing but help them and hurt the cause of fixing things.

Naturally, you can't fault someone if they're in a position where they're threatened. If someone is scared to testify against someone in court because they know they'll be hurt as a repercussion, it's unfortunate, but reasonable for them to do it. You always hear about government conspiracies involving death threats to keep people silent from spilling information about what their cohorts are really doing. You always hear about kids on the playground not wanting to speak up and say who did what, because they know they'll be bullied as a result. That's fine. At least you're not speaking up because of self-defense. But nobody should try to justify lying and covering up injustices out of some sense of loyalty to the type of people that would commit injustices. You want the cops to help find the criminal that stole your money, not to tell you that they can't do anything because he's a buddy of the chief of police, right? And look...none of us are perfect. We've all done bad things, then wished people wouldn't tell. We've all been in situations where a friend has done something bad and we've disagreed with it, but didn't say anything. I'm not saying that everyone should act like a constant spy/reporter hybrid here, squealing out every little bit of information that comes along. It's all relative with importance. You see people cheating on a test in school, no big deal. You shouldn't go crying to the principal's office asking for a full-on investigation. However, any rational person knows when something shouldn't be ignored, and if you choose to do it, you're almost as bad as the people that you're being loyal to, and what does that make you? An accomplice. 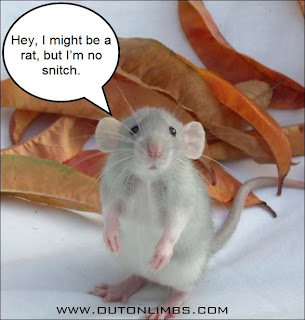