How to Fix the Economy in 3 Steps

I know how to fix the economy in three steps.

STEP 1: Eliminate Income Tax
One of the things that annoys me the most about this world is income tax. Think about it. You get paid in return for the work you put out, and the reason you did that work is to get paid, so you can take that money and spend it. But before you get a chance to spend that money on your taxes and bills, you have to immediately pay taxes on the fact that you earned money. You have to pay to be able to work to get paid to give the money to someone else! So you know what? Eliminate it. Now, you don't have to pay income tax. If you worked enough to earn 100 dollars, then the only money taken out is for social security and any other kind of expenses. If you're poor, you spend your money basically only on taxes, bills, food, medication, and gas for your car (if you have it). That's it. We know that most food isn't taxed, and gas can be written off in your taxes, so that means the money you own is already going primarily to keeping you alive so you can pay your bills and taxes to the government. They're getting your money anyway, and there's also less chance you'll get yourself in credit debt and NOT pay your bills. How often in this economy are people not earning enough money to pay their bills normally, and they just don't pay them, and you eventually have to settle for receiving less over time? Now that's not a problem outside of rogue people - and rogue people can't be controlled in the current system either, so that's a moot point.

STEP 2: Increase Sales Tax
Here's where greed comes into factor. With the previous step, you've made it so the poorer people can survive if they're rational and spend their money primarily just on the things that are essential. Now, you need to compensate for the people that aren't poor and/or waste their money. Increasing sales tax will counter balance the income tax, but naturally, you can't increase it 3000x the amount. We'll talk about that in the next section as well. By increasing sales tax, you make it so the greediest people with the most amount of money to splurge are the ones stimulating the economy the most. Have you ever met someone who will buy a brand new car every other year because they're simply bored with the one they have? The money you spend on the items that aren't necessary is what comes out of this. What it boils down to is that whether you're a billionaire or you just have enough that you can live comfortably, you're being taxed on how much fun you want to have. The people that can't afford to have fun aren't being reprimanded because the income tax is eliminated, so they only spend money on the requirements, but if you've got enough money that you can buy that X-Box or more unnecessary jewelry, you pay accordingly. There needs to be an adjusted scale of taxes depending on the importance of the product. Medicine that isn't frivolous (like Viagra or hair restoration treatment) along with clothing and food are tax free. Cleaning supplies, as they're pretty well needed, are low on the taxed scale. However, those completely pointless things that are driven solely by greed and ego are taxed the most. That diamond necklace you don't need other than to boost your own ego is now one of the highest tiers in taxes. You don't need it, you're just showing off your money, so you still get the ability to show off that money because now that 10 thousand dollar necklace is 20 thousand with taxes, so people still know you're rich. This also helps with illegal immigrants that aren't being taxed on their income but have no ability to escape being taxed on sales that they use that fraud money for. By proxy, it also works with drug dealers that don't pay income tax, as now if they want to waste their money, they're paying into the government's funding by doing so. What will their response be? Either they up their prices for drugs (meaning less people can afford drugs, so less people are drug users and we clean this place up faster) or they try to steal (in which they're more likely to get caught, sent to prison, and not be on the streets, henceforth cleaning up faster). But you might be thinking, "won't people be less likely to buy things if the price is higher because of sales tax?" and you're correct. However, they have the money to choose how much they want to spend on these things and it's all up to them. People will still blow money on frivolous things - we're human. When you look at your income tax, you just accept it being taken away, and you have nothing you can do, but if you were to look at an item that goes from 50 dollars total to suddenly 75, you're less likely to pay for it. HOWEVER...that's if you don't adjust the system accordingly.

STEP 3: Limit the Markup of Items
Markup on purchases can be absolutely ridiculous. If I'm able to buy a USB cable for 22 cents online and they're still making a profit, then why are they selling it in stores for 20 dollars? You just multiplied the amount by ONE HUNDRED. Granted, some markup is obviously necessary. You need to be able to not only cover the expenses of making a product, but also marketing, shipping, paying your employees, rent, etc. But once you cover your expenses, everything else is profit. That's where the trick comes in. Let's say you're trying to sell "Product X" and your expenses come out to a grand total of 3 dollars. One penny over 3 dollars means that you've got one cent of profit. There's no way in hell you should be able to mark the price up 100x that amount and charge 300 dollars for it. Markup values are different for each item, because naturally, you couldn't charge 100x what it costs to make say, a car, but you have more flexibility with cheaper things like DVDs. One of the reasons people don't buy CDs anymore is that there's no excuse to spend 23 dollars on a disc with 10 songs (some of which you may not even like) when you can spend 99 cents per song that you've already listened to and know you're getting a deal. It doesn't cost 22 dollars to make a CD, it costs pennies. There should be a limit on the markup of items to a certain percentage of profit. What that limit should be, I'm not sure yet, as I didn't run any numbers. But it's ridiculous that a company can take their expense for a t-shirt at roughly a dollar and charge you 15 dollars in response. Remember that issue about people not wanting to spend as much money on frivolous items because of the increased sales tax? Well the lower markup takes care of that. There was no way in hell I am going to spend 30 bucks on something if I can get it online for 6, and if I can get it online for 6, they surely didn't spend 6 dollars making it, and I'm much more likely to spend my money on items that are cheaper than those that aren't. There are lots of things I would love to buy right now, but I simply don't have the money for them, but I know if they were to downgrade their markup, they'd make a profit off me. Greed comes into play here, as always, and people would naturally want to set all their prices to the maximum markup level if you had a limit. That's not the smartest strategy, and they'd find out early on that they'd be screwing themselves. Why? Think about the one place that is making money in this economy: Walmart. How are they doing so well? They offer two things that other places aren't offering. Those two things are being able to go to one store and get all your shopping done, and most importantly, lower prices. So many businesses are struggling right now to make money and they think they'll get out of their funk by UPPING their prices, but that makes no sense whatsoever. If you're selling something for 50 dollars and nobody is buying it from you, because another store has it for 40, what makes you think people are going to pay you 60 for it? Is it a better idea to get 10 less dollars per person, but have 5 people buy your product, than to get TWO people to buy your product with 20 more added to the price? Figure out the math. Five people spend 40 dollars, which means you're at 200. Two people spend 60 and you're at 120. Therefore, the markup prices would have to adjust for competitors, meaning a place like Walmart might have to settle for a 20% profit because everyone else has 40%. It all balances out in the end. 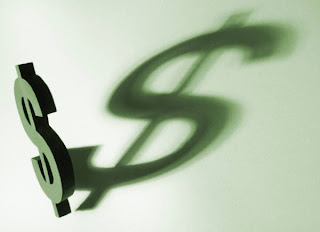