Why Does Pink Scream So Much? 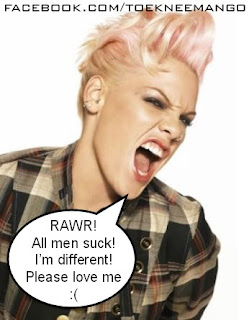 She really is annoying with that. Every one of her songs is just her screeching. Usually it's feminist, too. Apparently she's good for nothing but shouting, being mad at men, and looking like a lesbian suffering from parental neglect.

Examples: Her songs "So What" and "U + Ur Hand". Just listen to them, if you can. It's a shame that they're nothing but this incredibly annoying shriek that sounds like nails on chalkboard, because U + Ur Hand would make a pretty decent song if you changed the stupid ass lyrics and had someone else sing it.

Maybe she screams because she can't SING? Maybe she looks the way she does because it's easier to knowingly look odd than to just try to look beautiful but come to the end result of looking kind of manly and then seeming like you tried and failed? Maybe her music sucks so badly because...well, she's not alone there. Most music blows in general.

Nonetheless, yeah, when you belt out a song, it's supposed to be through "singing" it, not just yelling a bunch of your problems. This goes for your p.o.s. screamo bands out there as well. You know, the ones with men that look more feminine and have longer hair than Pink does? Equally as bad.
editorial, entertainment