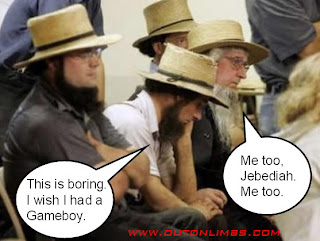 I don't get the Amish. What's the point of all that shit? It's unnecessary. I think they just want to look like martyrs. How is electricity evil in any way? It helps you. I bet when you're in mortal danger, you're damn happy you've got all that electrical equipment at the hospital that keeps you alive, right?

Look, I get that there's some deeply religious root to it - even though I think any religion that asks for you to devote yourself 100% to it and deny many of your basic human urges is messed up - but what does electricity have to do with God? I highly, highly doubt that there's a supreme being that thinks to himself/herself/itself "You know, they're good people, and they worship me, and they do everything I ask....but damn it, they've got lightbulbs. Those fuckers."

Many claim that it's an issue of pride. Electricity leads to more materialism. Ok, understandable, but you can be materialistic about anything. Remember before electricity when people would murder others over a good ceramic pot? You can be prideful about non-electric things just as much. The only difference is that electricity is commonplace and Amish people want to rebel. Yes, that's the core here - rebellion. An Amish person is similar to a Goth kid. Both see something that is the societal norm and want to be against it. The only separation is that Goth people do it out of fear and self-defense while the Amish seem to do it out of a good heart (and/or brainwashing if you want to get into the religion = cult argument).

I just think it's an unnecessary burden brought about by an irrational craving to feel special. Plus, those beards are ridiculous. 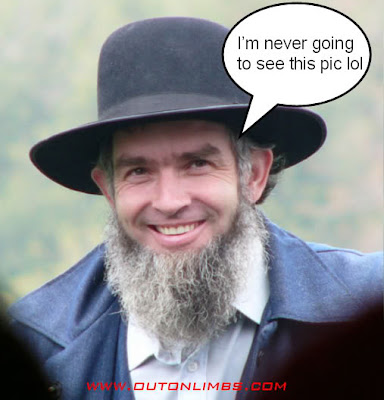