There is an unofficial pecking order when it comes to friendships, even if people don't really want to admit it. Most people don't really want to rank their friends because competition results in tension, but at the very least, it's relevant on a subconscious level. This is the hierarchy that I've always used in my head and I think it applies to everyone else out there - unless you're insane - for the most part.

The trick with this is that there are 4 "groups" that are made up of 7 categories between them.

Rank #1: Sibling - These are the people that you consider a brother or sister, essentially. They may not be related to your bloodline, but they might as well be. If they come to your place, not only do they not have to knock and can just walk right in, but you don't necessarily have to be there either as the rest of your family just considers them a regular as well. I pretty much consider 3 friends of mine to be a part of this group.

Rank #2: Cousin - Very close to you and definitely above the level of a normal good friend, but not quite at that zenith. Usually it's because they're missing the same outlook from the rest of your literal family as they probably don't see them as often and neither do you. I have 2 friends of mine that I'd place in this level.

Rank #3: Good Friend - The highest level if you don't feel like any of your friends are worthy of the first group. This is where, in that case, you'd find your "best friend". If you do have people in the first group, then this is a section for people that you interact with on a very frequent basis but you don't share that special connection with.

Rank #4: Friend - This is the most generic, wide-range section, containing the majority of the people that you actually go out of your way to socialize with. If your brother is in the passenger seat of your car and your cousin is in the back with a good friend, these people are driving another car but you're still meeting them somewhere.

Rank #5: Acquaintance - The people that you didn't personally invite, but someone else in your group did. You see them in gatherings often, but you don't go out of your way to spend any time with them. It's questionable whether or not these people are in your phone, as this is the first group that may not make the cut.

Rank #6: Casual Acquaintance - Facebook is basically the only thing keeping you linked. At most, you may respond to a status update they posted, but you never hang out, you never talk to them, and their numbers are most likely not in your phone. Chances are that they're friends from school and never really clicked with.

Rank #7: Not Opposed - You could describe your feelings about them by saying "they're ok I guess". You're neither best buddies nor worst enemies with someone in this group. They're simply just there. As if the Facebook connection seemed harsh for the sixth rank, these are the ones that you may have on Facebook but you never look at or respond to anything of theirs. You may not even know their last name offhand, let alone anything about them on a personal level. For all their worth, they are really just boiled down to not being someone that you dislike.

Here's the question: what section are you on when it comes to other people? Someone may see you as their best friend and their partner in crime but you sadly only rank them as a #4 in your mind. You may be awesome enough that you're #3 on average, or you may be delusional enough to be #7 to most people and not have a clue. 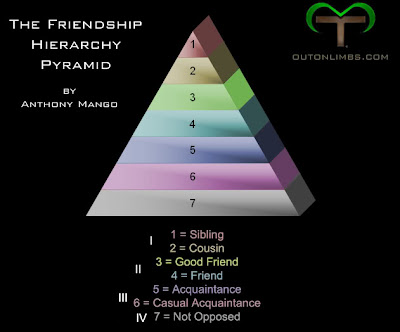